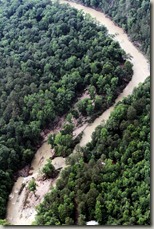 This might be old news to some of you, but that makes it no less of a tragedy.

In the early hours of Friday, June 11 2010, a flash flood ripped through the popular Albert Pike Recreation Area campground in Langley, Arkansas.  As campers slept peacefully in their tents and RVs, rivers began to swell at a rate of 8 feet per hour.

As the flood waters slammed into the campground, many families were left scrambling to get to higher ground in the darkness of the night forest.

At the time of this post, 18 campers have been confirmed dead and 22 people are still missing.

To add to the tragedy, a number of the victims were children.  Authorities have also stated that they fear the number of missing persons will rise as reports continue to come in. 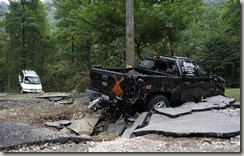 About 200 searchers have combed through 20 miles of wilderness on horseback, ATV, canoes or kayaks, looking for survivors or victims.

Experts say that it could take days before the river is clear enough to see through, slowing the retrieval of bodies that may have become trapped under fallen trees and rocks.

The force of the flood was so devastating that it left debris as high as 25 feet in the tree branches, overturned vehicles and mobile homes, and decimated the landscape.

Our thoughts are with the victims and their families.

MSNBC is covering the story, click here for more details.

All pictures used in the post are courtesy of MSNBC.

One thought on “Thoughts and Prayers for the Arkansas Flood Victims”